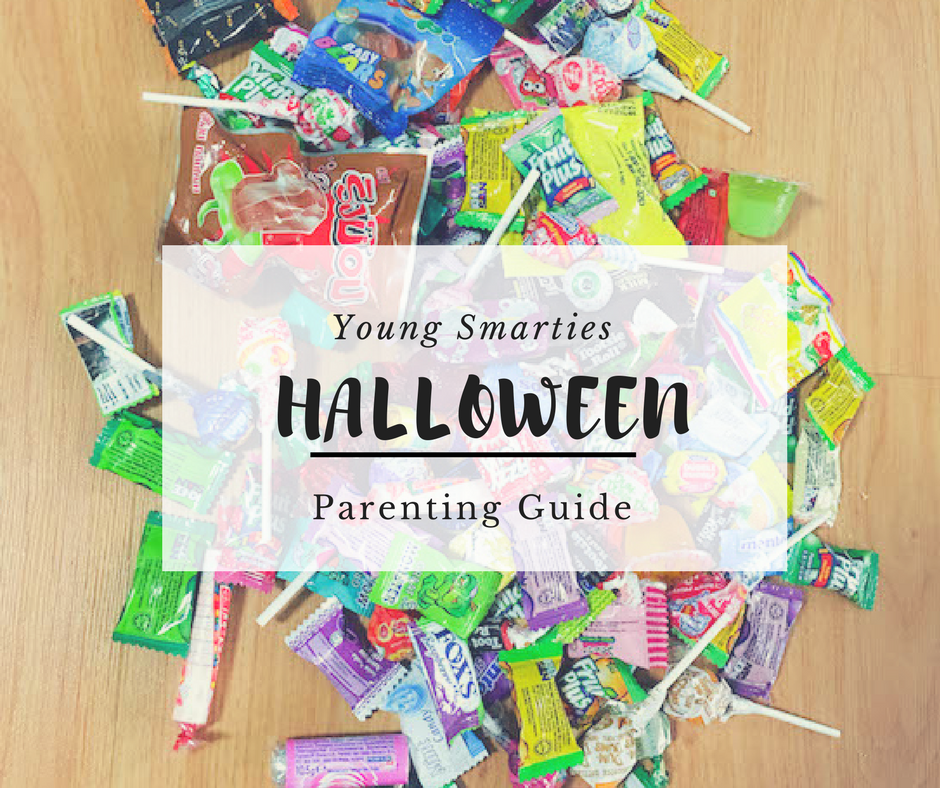 Since we started attending Halloween parties 3 years ago, we have been attending it “faithfully” every year but at different locations. Our very first Halloween was at Jurong Safra which was not documented here but the 2nd one we had it at River Safari. That’s our very first try at making costumes for the smarties. You can read more about it here.

Halloween is fun for the kids and adults too because we all get to creatively dress up (provided you want to) and be silly together. Is fun when you go around screaming trick or treat and get some sweets. Is NOT fun when your child started screaming he/she is tired and started throwing tantrum and rolling on the floor. Or the costume makes them uncomfortable due to the hot and humid weather here compared to the cool Autumn in other countries.

Is fun to collect all the treats. Is NOT fun when your child having the first hand on the “forbidden” food and started popping it non stop into the mouth because is “legally” given and is the occasion to enjoy it. Oh, guess what, because they have earned and collected so many treats that they want to keep it for the next few days so that they can continue to enjoy it. Let’s talk about the parenting woes during the Halloween season and how to avoid it the next round.

Parenting woes #1: Costumes
Parents, you are in luck if your child only wants a simple costume but if they want to dress up or if you want them to dress in a costume that is going to be thick or/and difficult to walk in, then be ready for some kickboxing, sushi rolling or/and singing later. If they are the one who insisted on putting on that “forbidden” costume, provide some warning for them and be ready for the tsunami later. If possible, wear bright colored clothes because when night falls, they will get camouflaged into the darkness and be careful of masks as it can cause suffocation for young children.

Gor gor wanted to dress up as Optimus Prime and we know he’s going to have difficulty walking the long distance in that. We did test driving at home and he knew about the difficulties but he insisted. We are doing all the things that we shouldn’t be doing but we had a deal with him so we were all ready to go without worries because we trust him. Mei mei, on the other hand, wanted the long dress with heels! We managed to coax her into shortening the dress and changed to flats instead (we knew she will caused tsunami later if we allowed). So there you go! Did we encounter any tsunami? Luckily no, but some tidal waves though but not now…

Parenting woes #2: Crowd
Tell me about it. Which party doesn’t have a crowd? Especially with children, parents will always try to reach their destination earlier so as to avoid crowds. The early start of the Halloween wasn’t that crowded but as the evening started to draw nearer more characters started appearing and poor mei mei got stepped on so many times that she started crying. Sorry no photos of her in that situation as I was trying to manage her emotions. Parents, if you are bringing them to such events, be emotionally and mentally prepared. Otherwise, it is best to stay home.

Yes, we had tidal waves here, but it went off pretty fast as we have pre-warned the children that they have to be ready for the crowd, the heat, and the long distance walking. Although we forgot to mention about the pushing and stepping on each other’s foot, she kind of expected this would happen hence no long waves but a short one. Whew!

Parenting woes #3: Candies crushed
I don’t mean the game on your gadget but the live game here! Trick or treat is the time where the children have access to all the candies and it is like they are in candies heaven (even for some of us). Some children will crush every candy they get in their mouths. Imagine the sugar high and then it comes crashing down like a roller coaster?!?! Some parents allowed the children to have anything they want because is just a day. But for me, I would prefer self-control.

Before coming to the event, smarties were pre-prepped that they cannot have more than 3 candies each. What?!? So many candies and they can only have 3? Sounds torturous huh? But we had a deal and they agreed to it. So there you go, you can collect as many candies as you want but only maximum 3 candies for the night.

Nonetheless, smarties enjoyed the Halloween a lot! Gor gor got to be a celebrity for the evening as many people came for a photo with him and mei mei got to pretend to be her favorite princess and sashayed down the road with gor gor while enjoying all the boo-tastic decorations on the houses. Kudos and thanks so much to the residents of Woodgrove for providing such and eventful Halloween evening for everyone!

The positive and negative impact of gadgets and its solutions

Do drop us a message if you:
- have any enquiry
- would like to collaborate
- would like to provide sponsorships, advertising opportunities, media previews, event invites, etc

We hope to hear from you soon!
Close Menu
×
×